Take Time Out: Sierra Leone and the Late Maya Angelou 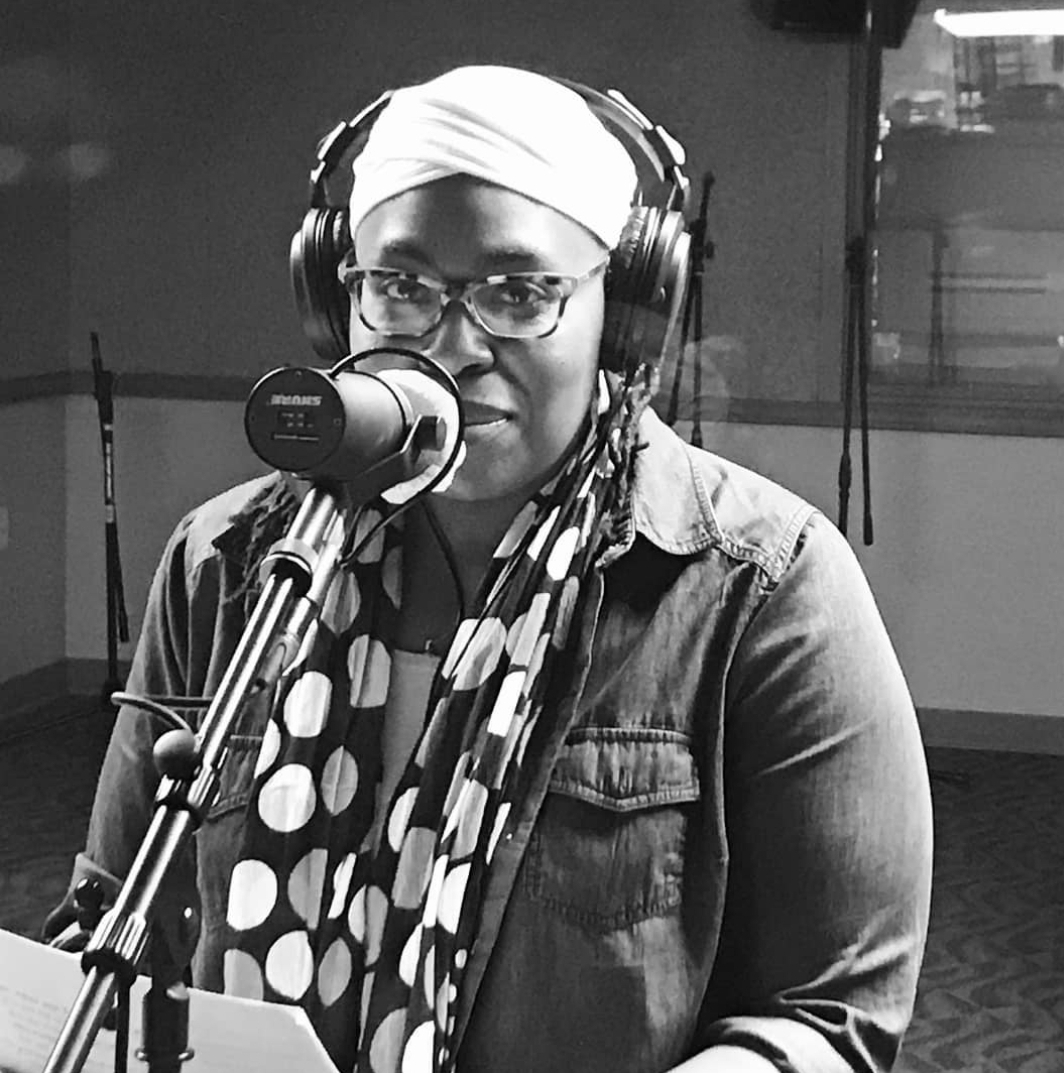 Among the hundreds of recordings in WYSO Archive, there’s an interview between the American poet Maya Angelou and an interviewer named Lin Harris from radio station WBAI in New York made in 1975. Somehow a copy of that reel-to reel-recording ended up in the WYSO collection, and ten years ago it was digitized.

Last year, Dayton poet Sierra Leone heard that amazing voice in the WYSO archives – and as she listened, found herself talking TO the tape. Maya Angelou died in 2014 and yet, through an act of poetic imagination, Sierra Leone and Maya Angelou had a lively conversation across the years. Our special program, Take Time Out begins with reading by Angelou from her memoir “I Know Why the Caged Bird Sings.” It’s a remembrance of the time the African American boxing champion Joe Louis defeated a white challenger.

Angelou: ...Louis is penetrating every block. The referee is moving in but Louis sends a left to the body and it’s an uppercut to the chin and then the contender’s dropping. He’s on the canvas ladies and gentlemen. Babies slid to the floor, as women stood up and men leaned toward the radio. Here’s the referee. He’s counting. One. Two. Three. Four. Five. Six. Seven. Is the contender trying to get up again? All the men in the store shouted “No!” Eight. Nine. Ten. There were a few sounds from the audience but they seemed to be holding themselves in against tremendous pressure. The fight is all over ladies and gentlemen. Let’s get the microphone over to the referee. Here he is. He’s got the Brown Bomber’s hand. He’s holding it up. Here he is. Then that voice husky and familiar came to wash over us. “The winner and still the heavyweight champion of the world. Joe Louis.” Champion of the world. A black boy. Some black mother’s son. He was the strongest man in the world. People drank Coca-Colas like ambrosia and ate candy bars like Christmas. Some of the men went behind the store and poured white lightning in their soft drink bottles, and a few of the bigger boys followed them. Those not chased away came back blowing their breath in front of themselves like proud smokers. It would take an hour or more before the people would leave the store and head for home. Those who lived too far had made arrangements to stay in town. You see, it wouldn’t do for a black man and his family to be caught on a lonely country road on a night when Joe Louis just proved that we were the strongest people in the world.

Leone: Ahh, It didn’t occur to me immediately but I needed to start right here! This short ethnographic narrative paints a picture of Angelou’s childhood and echoes an energetic spirit that brings my modern day senses to life. Just like Joe Louis, athletes today are using their platforms to permanently change the narrative. Maya's first hand account took me back to my childhood, summers spent on the West Bank of Baton Rouge, Louisiana. As a Black woman and mother, I know there is trauma that comes with black people succeeding. When a human being does not have to account for their entire race when they make an individualized choice or decision is my personal definition of white/majority privilege.
Welcome to Culture Couch, everyone. I am Sierra Leone, your host for today, joining me today is the incomparable Dr. Maya Angelou!

I know that you and I have a lot in common. We’re both mothers, we both have sons. We are both from the South, and we’ve both been raised and reared by our grandmothers. Tell me a little bit about Mama?

Angelou: Mama for me was my grandmother. People spoke of Mama as a good looking woman and some who remembered her youth said she used to be right pretty. I saw only her power and strength. She was taller than any woman in my personal world, and her hands were so large they could span my head from ear to ear. Her voice was soft only because she chose to keep it so. In church when she was called upon to sing, she seemed to pull out plugs from behind her jaws and the huge, almost ruff sound would pour over the listeners throb in the air.

Leone: I love the description you gave of your grandmother, or “Mama.” It makes me think of my mom and grandmother. I uncovered the sacredness of mothering that I did not understand as a teenager. That is where I found these words:

After one Time, there is Another
it is not the way
she sits with her legs open
like a man
her left arm resting on her knee
Her fingers gripping a cigarette
when she is angry

A victim with the weight of “right now” on her shoulders

She birthed into a family
where mothers allowed their daughters

to discover womanhood for themselves,
and self-validating feelings were enveloped.

if she could ever let go
tomorrow would not be the same day
with a different name,
After one time there is another,

I love looking into her eyes,
smooth mocha skin
leaves me wondering
if I will age as well as she

Mama Angelou, can you share with us a little bit about your process?

Angelou: As I worked at being a poet, I found that every subject I wanted to deal with had its own rhythm. So when a poem seems to be out of form, it is not. It has its rhythm. It might not be rhymed, and the rhythm might not be strict. The tempo might change… There is an internal rhythm to the piece. So when I start to write a poem I think about the subject and then I write everything I know about the subject. It might take 10 or 15 pages. And then I live with that, until I can figure out, what is the rhythm of this piece? If it’s hopscotch, there’s a rhythm to it. If it’s women crying, there’s a rhythm. If there’s loss of love, there is a rhythm, depending on whether you are talking about a day, an old love, a new love. So then I let the content dictate the rhythm then I work to bring it within that form, within that framework.

Leone: I understand what you’re saying. Without even knowing it, I’ve been operating the same way, for at least the last 8 years. You’re giving the words, an opportunity to live and to breathe and to find their way. You’re “standing on the power of words,” which is the title of one of my poems:

Standing on the Power of Words
like, crawling through the ember carnage of civil war,
climbing mountains of injustice,
crossing bridges of bigotry walking miles past inequalities.
Hostility (s)mothered what imagination prevailed
perched on the window sill of some-body-ness
Memoirs of yesterday, we stand at the feet of your life's blueprint
That is a piece I was commissioned to write. It was a tribute to MLK and Dayton’s own Paul Lawrence Dunbar, whom I know you are a fan of.

Angelou: Mm, yes. Paul Lawrence Dunbar, who has the most intricate kinds of rhymes and rhythms, because he wrote in the black language of the time. …I loved his poetry, because it all sang. I also loved Edgar Allen Poe for the same reason. The poem sang. There were rhythms and counter rhythms and polyrhythms.

Leone: The poetry does sing. I love the music of poetry, and I know you love music too. Would you tell me about the music in your poetry?

Angelou: I loved poetry so much. I heard it in the black music. I loved the church songs and the blues. Because the lines are so pretty.

Leone: For me, as a young girl, I loved rhythm and blues. It was everything to me. It was when I got older that I realized those lyrics were poetry. And I was inspired. I learned about poetic devices through R&B. Through love songs. Metaphors, similes, hyperbole, personifications. It was just so beautiful. Listening to artists like Toni Braxton, En Vogue, Al Green, Cyndi Lauper, Tina Turner, I immediately saw the magic, the mystery, the connection of the lyrical, music energy. It all came to life at once in my mind.

Right now, we are dealing with a pandemic. The anxiety, the depression and isolation is high. You wrote something in 1970 that could really aid us in centering ourselves today. As a holistic practitioner and healer, these words really hit home.This song is one of many blueprints that you left for us. We do need to take time out.

Angelou:
Take Time Out. Use a minute
feel some sorrow
for the folks
who thinks tomorrow
is a place that they
can call up
on the phone.
take a month
and show some kindness
for the folks
who thought that blindness
was an illness that
affected eyes alone. If you know that youth
is dying on the run
and my daughter trades
dope stories with your son
we need to see
what all our
fearing and our
jeering and our
crying and
our lying
brought about.
Take Time Out.

Leone: Thank you, thank you! This song is one of many blueprints created directly from your lived experiences. Mama Angelou, thank you for sharing your eternal wisdom. I...my soul feels honored to connect with you, your spirit, your essence, your truth. When I released myself from the expectations of the person I was pre-pandemic, and the social justice paradigm shift, I could see and remember the truth of who I am, and see that in others. Each of us gets to take time out! I am Sierra Leone, local writer and artist, thank you for tuning in to Culture Couch.

Take Time Out featured Dayton poet Sierra Leone and the late Maya Angelou and was produced by Luke Dennis. Special thanks to Basim Blunt for music recommendations. Support for Culture Couch on WYSO comes from WYSO leaders Frank Scenna and Heather Bailey, who are proud to support storytelling that spark curiosity, highlights creativity and builds community.