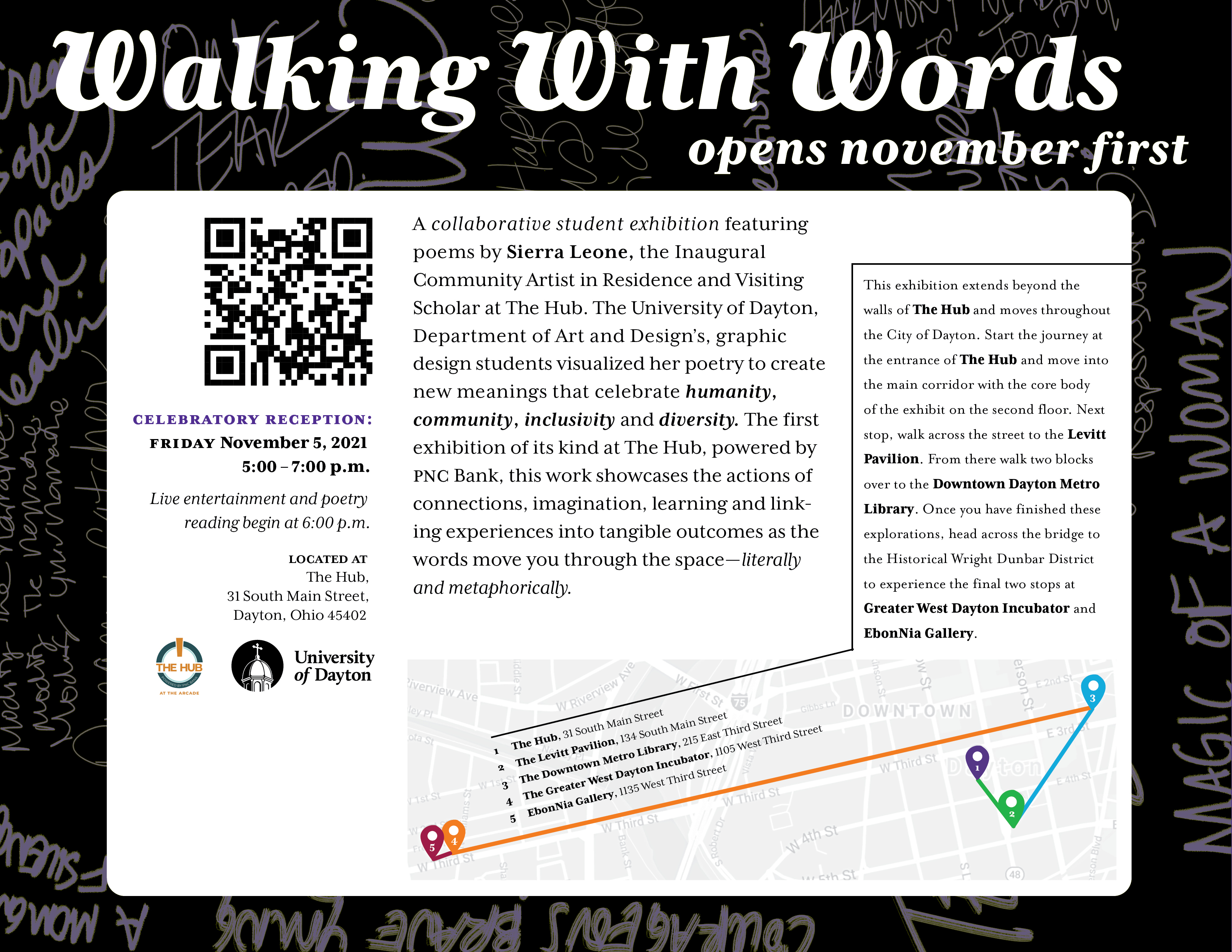 We all have unanswered questions. We all have faced tough decisions, loved and lived beyond limitations, underestimated the joy of simplicity, and have found unexpected adventure in the darkness of the unknown. Through poetry, we can navigate the unknown and answer these probing questions. Walking With Words, an interactive exhibit featuring sixteen poems written by Visiting Scholar Sierra Leone, takes us on a journey of discovery and introspection.
The pieces selected are intimate and public-facing. Sierra Leone’s poetry embodies the spirit of a creative catalyst whose craft is in direct alignment with her growth and transformation. “Walking with Words” pulls from Sierra Leone’s extensive body of work including poems from her three manuscripts: “Handwritten,” “October Butterflies,” and “Sixlines.” She is a genuine wordsmith who enjoys playing with images and language. Her strength as a sensory storyteller welcomes both readers and hearers of her powerful work to become a part of its telling.
There is no separation between Sierra the poet and Sierra the community convener and collaborator, Sierra the behavioral science practitioner, or Sierra the spoken word artist. She brings sincerity and clarity to everything she does, and it has profoundly impacted her artistic vision and poetic voice. Hers is a journey of service work in the arts, education, and healing. It has become her mission to write about the complexities of life while using ingenuity and innovation to expand the role and value of urban voices and artists.
Her words find a way into our hearts. It is through story, imagination, and human connections that she uses her practitioner’s approach to create harmony, empowerment, and honest conversation throughout the poems selected for this exhibition. Her natural internal rhyme has always been the pulse of her work.
We invite you to enjoy the collaboration of poetry, graphic arts, and visual interpretations of Walking with Words. As the audience, you are welcome to interact, imagine, share your thoughts, listen, leave questions, and remember to be creative.
VIEW WORKSVIEW WORKS

“Walk with me through a city within a city”

Sierra Leone "Spirit of a Flyer" 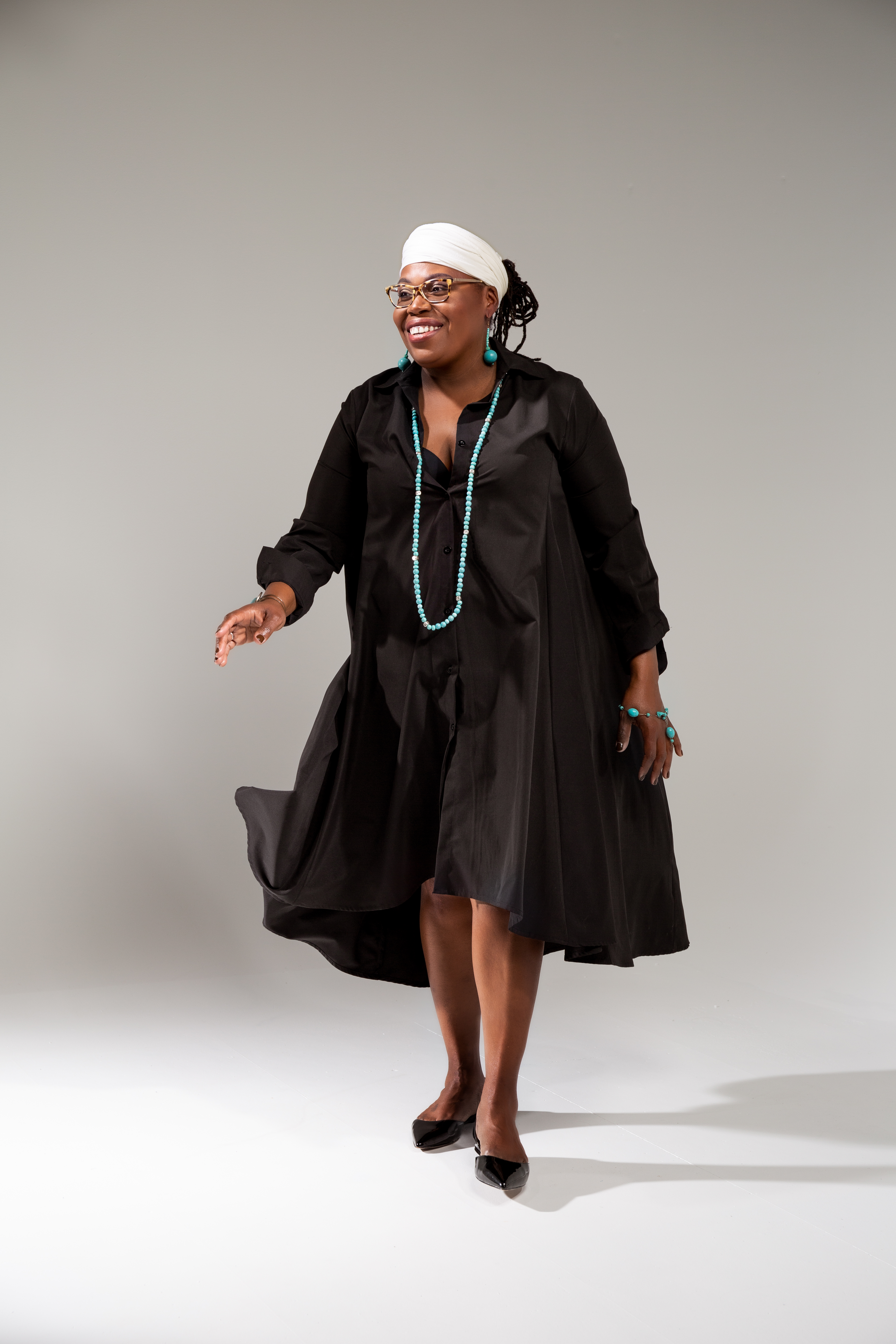 founder of OFP Theatre and Production Company. For more than a decade, Ohio has benefitted from Sierra's vision of creative urban arts as a powerful artistic medium to bring communities together across racial, cultural, ideological, and economic divides. Her project “The Signature: A Poetic Medley Show” presents a hybrid of urban poetry, music, dance, and visual arts from local, regional, and international talent and now includes an energetic poetry competition called The Last Poet Standing.
A highly recognized community organizer and educator, Sierra has worked with youth arts organizations, schools, and neighborhoods through her company’s educational arm, Signature Educational Solutions, and has reached hundreds of students. Sierra also empowers girls and women with her enrichment and mentoring program, I am Moon Power, which creates a natural bridge for excellence.
As a writer and leader of an urban poetry movement in Dayton, Ohio, Sierra Leone, who was a 2020 Kennedy Center Artist Fellowship Finalist Nominee, has written and performed commissioned work for many local and national organizations. Highlights of her public and commissioned poems include: "Spirit of a Flyer" for the restored Dayton Arcade and creation of The Hub, for Community, Artists, Creatives, & Entrepreneurs; “Vision Perfected” for the Dayton Philharmonic that was performed live on stage at the Wyclef Jean Symphonic Concert; "Gathering Space" and “Music Heals on Fifth and Main” public work on permanent display at the Downtown Dayton Metro Library and Levitt Pavilion Dayton. Her fictional poetic monologue entitled “Katrina 2031 was featured at TEDx Dayton 2014. Because of her powerful and moving presentation, she now serves as a TEDX Dayton speaker’s coach and co-chair. In December of 2018, she became a playwright, co-writing Eunice: Starshine and Clay with her partner Nate Leone. The show was named one of the 2018 top ten Theatre Shows in Dayton, Ohio. Sierra Leone received a Bachelor of Science degree in Criminal Justice from The University of Toledo. Her personal drive for educational excellence inspired her to complete the Inner Visions Institute two-year Personal Development Program, Spring 2019. That same year, Sierra graduated with her second master’s degree receiving her Masters of Business Administration from Wright State University.
Over the past decade, Sierra has developed a strong connection with the greater community as the co-founder of the Home for Urban Creative Arts and Artists, which in April 2020, sponsored the inaugural Urban Creative Arts Healing and Performance Symposium that featured 30 Urban and Community voices. Currently, Sierra Leone is working on her new book of poems, Poet is Prophet.
Find her on